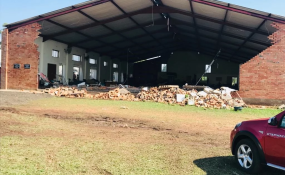 The KZN church where a wall collapsed, killing 13 people.

The ANC has sent its condolences to the families of 13 congregants who died when part of the Pentecostal Holiness Church in Dlangubo in KwaZulu-Natal collapsed on Thursday night.

“Last year, the church hosted ANC President, Comrade Cyril Ramaphosa, during its important gathering. The President visited the church as part of reconnecting with its history as the ANC was formed in a church,” party spokesperson Dakota Legoete said in a statement.

“The ANC calls on all South Africans to pray for the families to have strength during this difficult time.”

It also wished those injured a speedy recovery.

Times Live reported that the DA’s Zwakele Mncwango also sent the party’s condolences, saying it was “sad” to learn of what had transpired overnight.

Perpetual rainfall and heavy winds from a storm in the northern part of the province is believed to have caused the collapse.

According to KwaZulu-Natal Emergency Medical Services, a Passover service had been underway when the incident occurred.

In addition to the 13 fatalities, six people were seriously injured while 10 sustained minor injuries.

According to police, 29 people have been transported to hospital.

Mayor of the City of uMhlathuze Mduduzi Mhlongo also on Friday extended his condolences to the bereaved families.