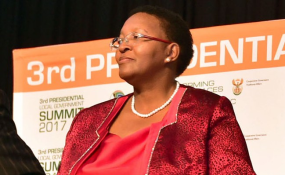 Cape Town — A leaked recording of Gauteng Sports and Recreation MEC Faith Mazibuko allegedly threatening her staff with dismissal if they failed to build ‘combi courts’ (a contraction of combination courts) has landed the official in hot water, according to Eyewitness News. The rollout of these multi-purpose sports facilities was allegedly meant to gain an advantage for the African National Congress ahead of the national elections, according to a report from investigative journalism unit amaBhungane.

In the recording, the MEC insisted that the facilities be built in various parts of Gauteng before the end of the financial year, the failure of which would result in the unused funds being reallocated to the National Treasury. “I want those combi courts, we want to use them to campaign to win elections. You two… I want those combi courts. However you do it… even if you go construct it yourself or perform some magic… you better do it. There will be no rollover of funds… it will work in this current financial year. We can’t be telling communities we will build combi courts and not deliver. I do not want to hear stories… I want those five combi courts rolled out,” she said.

Mazibuko added that only her office had a white head of deparment and an Indian financial officer, writes The Sowetan. “It’s clear you are not ready to work in this environment, I empower you you are not empowerable. Which other department has an Indian that is a CFO? Which other department? You are the second one, a woman, you must thank your lucky stars … “Which department has an HOD that is a mlungu? Ayikho including national so you must thank me for empowering you so don’t sabotage me,” she said.

Mazibuko’s department responded to the allegations following the emergence of the recording, TimesLIVE writes, saying she was aiming to ensure that service delivery targets were met. Departmental spokesperson Nomazwe Ntlokwana said in a statement: “The department would like to state that at no stage in any meeting with her staff did MEC Mazibuko give unlawful instructions, except to stress the importance of achieving performance targets of the department and fulfilling promises made to communities as part of service delivery agreements.”