Zimbabwe: Minister Moyo in Bid to Set Up Mnangagwa-Trump Meeting

in General July 23, 2019 Comments Off on Zimbabwe: Minister Moyo in Bid to Set Up Mnangagwa-Trump Meeting 115 Views | Short URL 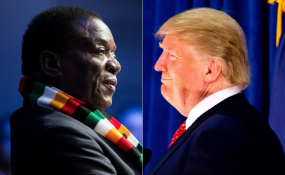 As government intensifies its re-engagement process with the West, plans are afoot to have President Mnangagwa meet with the US President Donald Trump.

The minister told this committee that relations with Great Britain and the European Union (EU) had greatly improved.

The US government has in the past urged the Mnangagwa led administration to walk the talk and implement political and economic reforms as well as respect the rule of law.

“We have been in good books with our friends in the East. The challenge has been ending our isolation with the West. We had to start with the original, the United Kingdom with efforts to normalise relations with UK, the EU and the United States of America.

“Our government is in the process of re-engaging with the rest of the world but so many puzzles have to be put together. Our president must meet with American president Donald Trump but it is a process,” Moyo told the committee.

He also stated that the unpopular Zimbabwe Democracy and Economic Recovery Amendment Act (ZDERA) interferes with government’s bid to establish normal relations with the US.

“In the Second Republic of Zimbabwe,” Moyo said, “ZDERA should be considered irrelevant. It has run out of its relevance. This impedes interaction between Zimbabwe and USA.”

The minister however said he was impressed with the kind of relations that now exist between the country and the EU and Britain with millions of dollars having been poured into the country for investment purposes.

“Initially, the EU refused to recognise the new Zimbabwe administration alleging election rigging. We have launched a dialogue to upgrade our level of engagement. Resumption of dialogue with EU is a precursor with other nations such as Switzerland. EU has given us $234 million to us through key financial institutions for development purposes.

Weekend operation led to seizure of unlicensed firearms and ammunition

Police recover counterfeit cigarettes to the value of R312 500-00