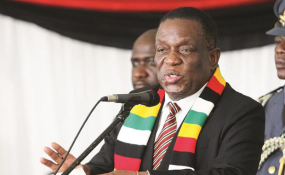 Mnangagwa told State television in an interview to mark Zimbabwe’s 39th independence anniversary that some of the issues around Gukurahundi should have been resolved by Mugabe.

“What I am happy is that the Matabeleland Collective approached me and said they would want to discuss the issue of Gukurahundi and lack of development.

“And I agreed, these are citizens of this country and I discovered that actually it was unfortunate that in the past we did not entertain such dialogue. We learnt a lot from this dialogue and discovered that our differences are not critical,” said Mnangagwa.

A few years after independence in 1980, Mugabe unleashed a North Korean trained crack military unit known as the 5th Brigade ostensibly to hunt down a handful of dissidents in the western provinces of the country. However critics argued Mugabe’s plan was to decimate then opposition Zapu leader Joshua Nkomo’s supporters. As it turned out, Mugabe only withdrew the army after Nkomo agreed to fold his party and join Zanu PF under a ‘Unity Accord” inked in December 1987.

Mnangagwa seen as Mugabe’s longtime enforcer was Intelligence Minister and reports claim he described Nkomo’s supporters as “cockroaches that needed to be exterminated” by a deadly chemical known as DDT.

In the interview with ZBC, Mnangagwa who wrestled power on the back of a military coup in November 2017, said government in opening up discussions on Gukurahundi is affording itself a platform to explain issues to the people of Matabeleland.

“It is a platform in which government can explain itself and be able to appreciate the needs and priorities of these areas,” the President said.

“I don’t see anything wrong with discussing in newspapers, television and other circles. There is nothing to fear about this debate and as a result of the conversation which we had we have created a matrix for the implementation of ideas. Some of the issues could have been resolved a long time ago and there not a single issue that cannot be discussed.”

Mnangagwa said Gukurahundi is an internal issue that must discussed by Zimbabweans. Human rights groups claim as many as 20 000 people were killed by the army in the seven year brutal campaign by the 5th Brigade.

Mugabe speaking at Nkomo’s funeral in 1999 described the episode as a “moment of madness” and demands to have him issue an apology were however met with scorn from the then Zanu PF leader.