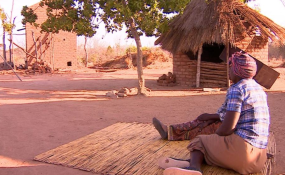 Women sit outside their huts on the outskirts of Harare.

Mutare — “The political elite control everything from land-allocation, business, commerce and policies in the country to the detriment of the poor and marginalised”

As dark clouds began to build on the horizon, Tarisai Nyakunu Zimunya, a single mother-of-three, looked worried. The fragile structure she calls home would struggle to withstand a drizzle, let alone a storm.

Zimunya is one of thousands of people living in expanding illegal settlements in the eastern city of Mutare, one of Zimbabwe’s largest, with a population recorded in the 2012 census of about 187,000.

“With the rainy season coming, it is going to be difficult for me and my family. I cannot afford to pay rent for a better house, so I have no option but to live (here),” Zimunya said.

The daily quest for clean water and firewood is an unceasing nightmare for the residents of Mutare’s slums.

“We get water from a deep well a few kilometres away,” the 37-year-old said. “The water is not all that clean, but we have no choice.”

And without electricity – and gas stoves unaffordable – the women must head to the nearby mountains to forage for firewood. It adds hours to their working day.

“But the wood is becoming scarce and we are now travelling long distances to get it. It’s not safe, but that is the only way for us to survive,” said Zimunya, who ekes a living by selling vegetables to support her children, who range from three- to nine-years-old.

Zimunya’s story is repeated across Zimbabwe, which remains in the grip of a deep economic crisis. Unemployment is above 80 percent; as a result, illegal settlements are growing in every major city, said the Zimbabwe Congress of Trade Unions.

But those settlements lack running water, sewerage, paved roads and electricity. Health experts fear when the rainy season comes in November they will become havens for disease.

World Bank figures show around one-third of Zimbabwe’s 16 million people live in urban areas, and that its urban population is growing about 2 percent annually.

Statistics from the United Nations’ Millennium Development Goals database from 2014 show that one in four of the country’s urban residents, or about 1.25 million people, live in slums. Experts said that figure is likely higher.

It is women like Zimunya who bear the brunt of the burden as they are forced to fetch water from tainted sources, gather firewood for cooking, and try to dispose of household waste.

And their position is unlikely to improve soon. The government’s figures show a housing shortfall of over 1.3 million units, with the capital Harare needing 500,000 homes.

In the decades that former president Robert Mugabe was in power, government spending ballooned – however, more 90 percent of the budget went on civil servant salaries, which left little for investment needed to boost growth or for social spending. When he presented the budget in December, Finance Minister Patrick Chinamasa admitted many people had spent years waiting for affordable accommodation, and said the government must prioritise spending on housing.

Chinamasa, who acknowledged housing was “a basic human right”, allocated $182 million to support an array of strategies to improve housing.

He said it would work with housing cooperatives, and had developed financing strategies with the Infrastructure Development Bank of Zimbabwe and the Urban Development Corporation to provide low-cost serviced land for development.

Though housing experts welcomed the pledge, they said much more was needed, particularly in addressing accusations of corruption in the housing sector.

A Mutare-based housing expert, David Mutambirwa, said new slum settlements had mushroomed in the city since 2014. He said he feared the new housing facility would benefit only the political elite, not the deserving poor.

“Corruption in land-allocation on both urban and farm allocation continues to benefit the political elite,” said Mutambirwa, who is also the director of the Mutare Residents and Ratepayers Association.

Mutambirwa has long lobbied the city to provide cheap and affordable housing, and has worked closely with Mutare’s homeless people and the city council’s housing department.

“The political elite control everything from land-allocation, business, commerce and policies in the country to the detriment of the poor and marginalised,” he told the Thomson Reuters Foundation.

And, he said, the amount of money allocated for housing was insufficient to address Zimbabwe’s huge housing shortfall.

“This clearly shows that there is no political will to address the housing shortage by the government,” he said.

Difficult though the situation for slumdwellers is, it was worse in 2005 when, during winter, the government launched Operation Murambatsvina, which meant ‘Drive out the filth’.

It destroyed tens of thousands of illegal homes in urban areas, and left over 700,000 people homeless, according to the United Nations.

The government’s actions – which were roundly condemned by rights groups – pushed many people back to rural areas.

But in the intervening years, with little work and few opportunities, people have been returning to the cities. However those like Zimunya and her children who live in Mutare’s slums look unlikely to get much help from city hall.

The mayor, Tatenda Nhamarare, said the city was working hard to alleviate its housing problem, including by building roads and sewerage facilities “in high- and low-(density) residential areas” prior to house-building.

“And private land developers are also helping to provide decent accommodation to the people,” Nhamarare said.

However he was quick to say the city would not tolerate illegal settlers.

“We cannot do anything for them (illegal settlers) – they must vacate the areas they are occupying,” he said.

Associations that represent Mutare residents said many homeless people could not afford the residential stands on offer.

Human rights lawyer Passmore Nyakureba said that ran contrary to the obligation by local and national government to supply housing to citizens – either by providing housing or by ensuring access to land for development at low cost.

“But, as you know, our government has really done very little in this area as it has alienated its primary obligation through either the commercialization or politicization of the right to access to both urban and rural land,” Nyakureba said.

He said given the government’s approach, the only option was to keep urging it to meet its responsibilities to provide land for its citizens.

“On its own this government will not do anything towards fulfilling any of the rights of the people of Zimbabwe unless there is political gain to it,” he said.